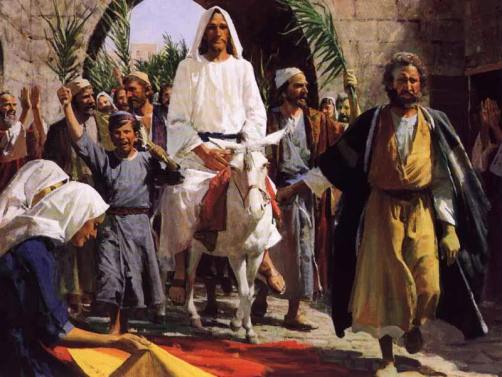 While looking over the city, Jesus could see,
That it would suffer; because of apathy.
How He longed to save it from such a fate,
But the time was upon Him – the time was late.
He knew men’s hearts; the fickleness of man.
He knew their great need, and the Father’s plan.
He saw, as they lifted their voice in praise,
That many would cry, “Crucify Him,” in just a few days.
Heaven was watching,; as the multitude ushered in Jesus as King.
They saw the little children dance and sing.
Great, was the expectation and excitement in the air.
The streets were lined, with Angels, that also was there.
Two kingdoms were watching; one blind and one that could see.
The eyes of man were hindered by sin; and ideas preconceived.
They only saw their desire for a King to crown.
They shouted praise, as they waved palms, and threw them down.
But the heavens, saw God’s great plan unfolding before them.
They too could see mankind’s great need to be freed from sin.
Indeed, the rocks would have shouted, if the children did not sing,
For Greatly to be praised, is Christ the King!

Luke 19:41-43
And when he was come near, he beheld the city, and wept over it,Saying, If thou hadst known, even thou, at least in this thy day, the things which belong unto thy peace! but now they are hid from thine eyes.For the days shall come upon thee, that thine enemies shall cast a trench about thee, and compass thee round, and keep thee in on every side,